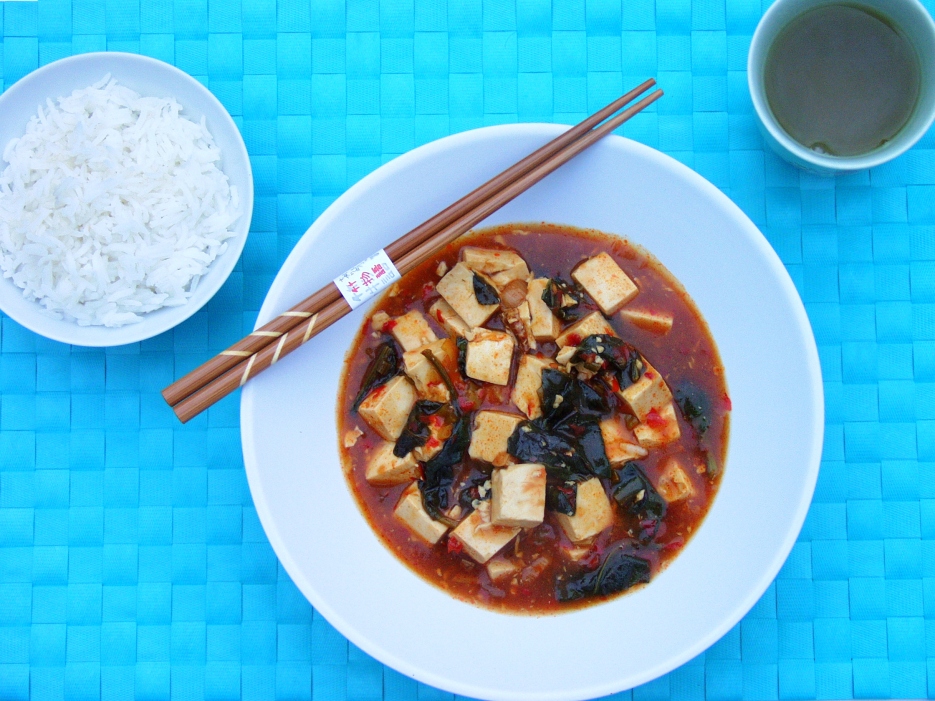 In my first months of blogging, way back in the middle of 2011, I posted one of my absolute favourite recipes, Ma Po Tofu, which is a Sichuan classic and is seriously addictive – if you like chilli that is. It is incredibly easy to cook and after a manic day it is the perfect pick-me-up-food that takes no time to prepare. Over the years however, I have found that I am increasingly making it without the pork mince element and keeping it to a more vegetarian dish by including simply tofu and fresh (or sometimes frozen) spinach.

Recently in Hong Kong I began to judge eating establishments on how well they could cook Ma Po Tofu and Dan Dan Noodles as I had a acquired a taste for both dishes.

Tofu I know divides opinion, but I am definitely in the camp of someone who loves it. It wasn’t an immediate love affair, but one that has grown over time to the extent that I always have tofu in the house, ready and waiting for me to make a last minute Ma Po Tofu dish or my other favourite tofu dishes, roasted harlequin squash with tofu, kale and coriander in a miso curry paste, black pepper tofu and soba noodles with tofu, aubergine and mango. Seriously give them all a try – I don’t think you’ll be disappointed.

Tofu, or bean curd as it is also known, is hugely nutritious, versatile and a great vehicle for flavour. It’s rich in protein and low in fat, especially saturated fat. Yes, eaten on its own it is rather plain, but the point of tofu is to incorporate it with other flavours which it will help to enhance and lift. There are a myriad of different types of tofu, but the one I tend to use the most is ‘firm, silken tofu’ . I am going to be cooking some more tofu dishes over the course of this year, hoping that I may convert a few followers to the joys of tofu eating.

So here is what you need for the vegetarian version of the dish.

125ml of vegetable stock (fresh or a cube)

1. Cut the tofu into small (2cm) cubes and place to one side.

3. After a minute add the vegetable stock, shaoxing wine, soy sauce, sugar and salt and bring to the boil.

4. Add the spinach to the pan and gently fold into the hot sauce.

5. Once the spinach has begun to wither add the tofu and carefully spoon the sauce over the tofu, making sure not to break up the cubes. Leave to gently simmer for a couple of minutes.

6. Serve into a large bowl and sprinkle the Sichuan peppercorns and sesame oil and gently mix together.

Serve alongside small bowls of rice and hot cups of piping Jasmine/Chinese tea.

Perfect for this cold snowy weather.

I wanted to introduce you to a wonderful bold spice that is probably unfamiliar to some of you.

This wonderfully flavoursome spice derives from the berry of a plant called ‘Rhus Coriaria’ that ranges from bright red to plum in colour and is grown wild throughout the Middle East and some parts of the Mediterranean. Whilst you can buy the berry whole, it is more often purchased dried coarsely or finely ground. The Romans used it as a souring agent as it has similarities to lemons in its tangy, tart taste.

Whilst ambling around the spice market in Turkey this summer, I purchased some to last me for quite some time.  However, like most things these days it is also available closer to home and can be purchased at most supermarkets or Middle Eastern food stores.

So as to appreciate fully the qualities of the spice I thought a straightforward version of the ubiquitous Palestinian dish,  Musakhan, would be a great place to start. The ingredients are simple and yet make a most appetising meal that can be enjoyed by all the family. It’s definitely a meal that you have to roll your sleeves up and get stuck in, so as to speak, and it requires you to eat it ideally with your fingers – far more satisfying. A number of the recipes for this dish talk about the  sumac chicken and onions (and sometimes also allspice and saffron!) on a flat bread that then gets toasted and scattered with toasted pine nuts, but I thought I would create the dish in a wrap form to make it easier to pick up and eat. I leave it to you to consume in either the flat or rolled form, both will be equally delicious I assure you.

1. Place the half the sumac, 1 tablespoon of olive oil, lemon juice, salt and pepper over the chicken and leave to marinade for a few hours or overnight

2. Preheat an oven to 180 degree and roast the chicken for 1 hour or until cooked

4. Add the chicken stock to the onions and stir in thoroughly for a couple of minutes

5. When the roast chicken is cooked leave to cool slightly and then shred the chicken, using a fork, from the carcass. There will be lots of juices from the chicken and sumac so place these into a dish with the shredded chicken.

If you want to keep the remains of the carcass you could make this chicken soup.

6. On the Middle Eastern flat breads place the shredded chicken, soft juicy onions and wrap tightly and place back into the oven for a couple of minutes to heat through. Then serve immediately with a quarter of lemon on the side.

As an alternative you could serve the shredded chicken hot and warm up the flat breads and let your guests serve themselves and create their own wraps, in the same way that you would make your own duck spring roll!

I served mine with a green salad which was full of olives, gherkins and tomatoes. A garlicky yoghurt or raita would also work exceptionally well.

Smother the uncooked chicken with the sumac, olive oil, lemon, pepper and salt and leave to marinade for a couple of hours or if you are really well planned, overnight! I love the bright redness of the spice.

Shred the roasted chicken and mix it with all the juices that have come from the roasting. The taste is divine. 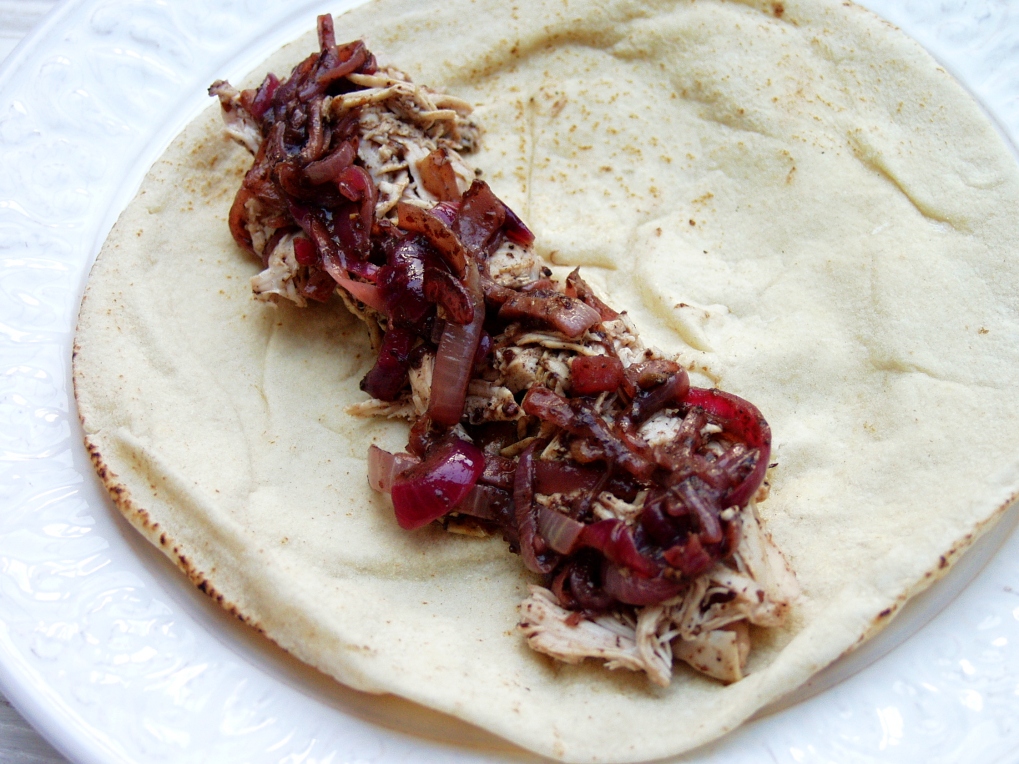 Be careful not to overfill or you will find it hard to warp and then hold and eat.

The finished product. Roasted chicken with sumac, lemon and onion wrap. They are totally addictive and I assure you it is easy to polish off quite a few.