Here in the UK we’ve been enjoying blissfully balmy weather this October. To date, I have yet to don my winter coat, which would have been unheard of in past years. As such we’ve not been craving heavier stews and curries, but instead continuing to enjoy lighter food that we would eat in the summer months. So when my friend Vritti, the founder of Binge Magazine (have you bought your copy yet? I took a couple of the photos, including the front cover and one of the articles – you can buy your copy here), made a whirlwind visit to London from Dublin, I wanted to cook something fuss free, light and delicious for lunch. 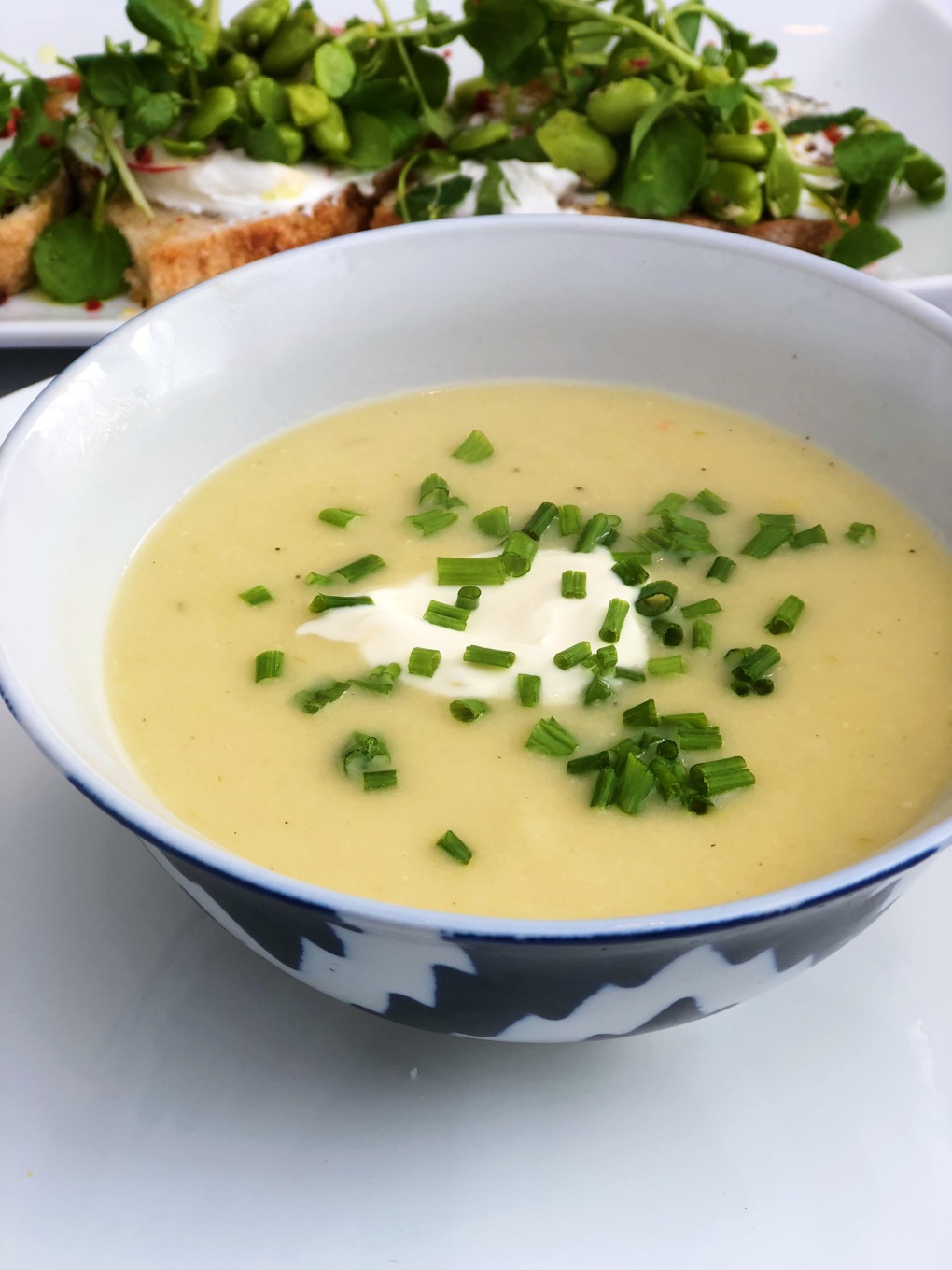 I adore sourdough bread, so opted to make toasted sour dough with goats cheese, radish, watercress, lemon zest and pink peppercorns with a honey, lemon dressing. Lots of colours, textures and flavours each complementing one another. 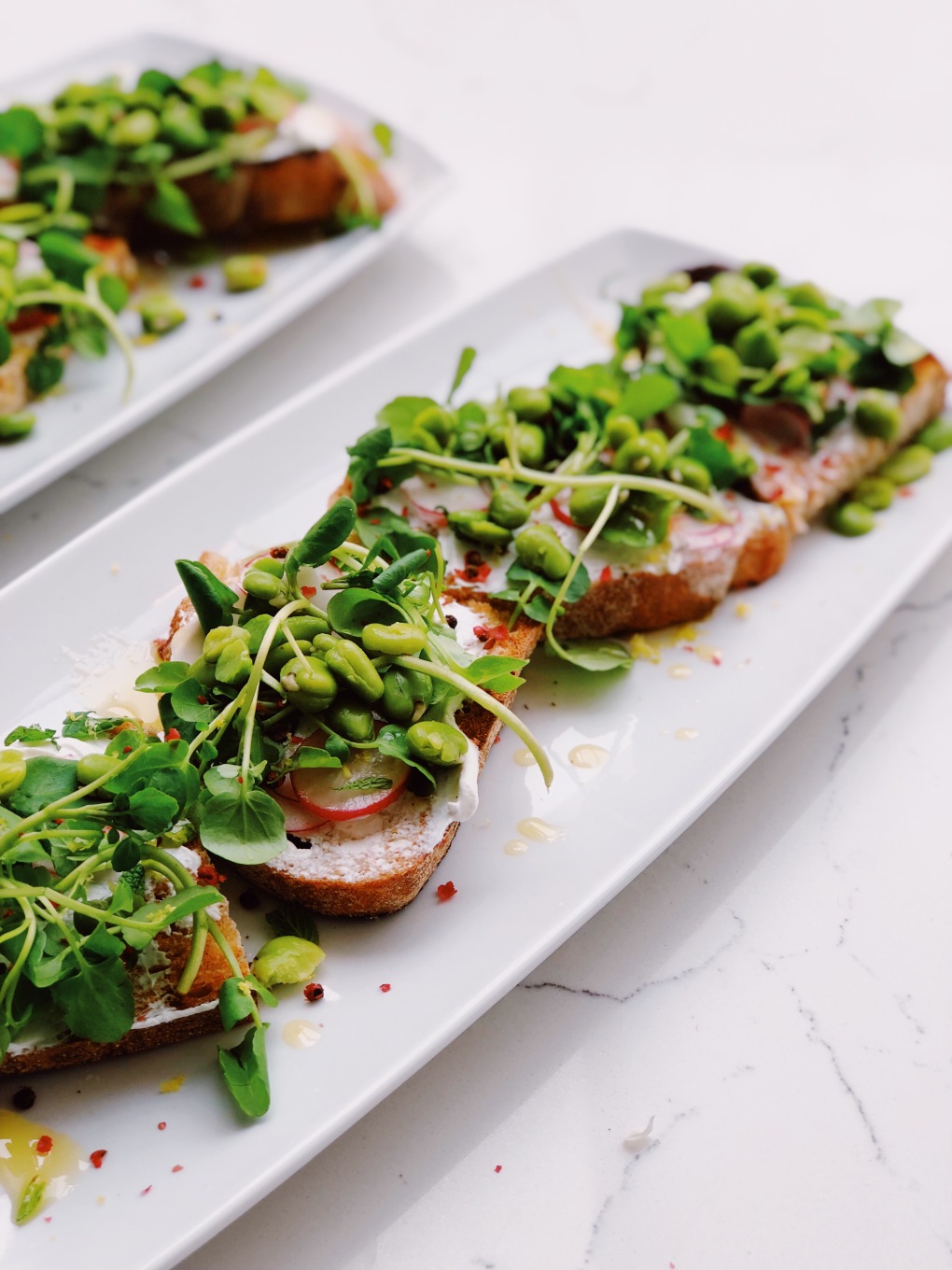 On the side I cooked a simple leek and potato soup that was both light and flavoursome.  I garnished with a dollop of creme fraiche and fresh chives adding another layer of flavours. Both dish are relatively quick to rustle up and can be made a little in advance as the toasted sourdough is best eaten at room temperature and the soup can be heated upon the arrival of your guests.

3 handfuls of fresh watercress (you could also use rocket)

4 pink radishes, finely sliced (I find a mandolin great for doing this, but be careful about your fingers!)

water to cover the vegetables

pepper and salt to taste

A great combination that looks colourful and healthy and is packed with lots of fresh flavours.

If you ever feel a little lethargic/hungover/sleepy (delete as appropriate), in the mornings, my Indian take on French toast will sharpen up your senses and give you that necessary skip in your step to take on the day ahead. Drinking coffee has never rocked my boat, although I do love the smell of freshly ground coffee and would so love to love drinking it, however, I find that a burst of chilli for breakfast – yes for breakfast – does awaken the endorphins rather well. 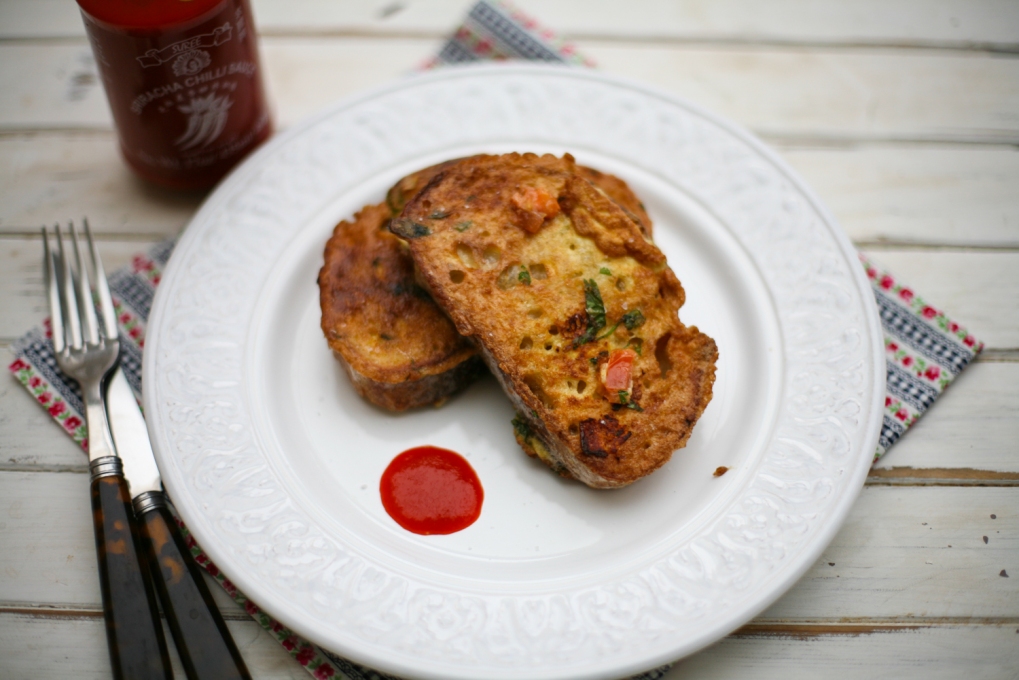 I also thought that it may give you some ideas on what to feed the masses if you have a number of guests staying over for Christmas. We often decamp down to my parents for part of the Christmas break and as there is ten of us we all help with the share of the cooking. This recipe is so quick that by the time someone else has laid the table you have already made a pile of these delicious beauties ready for the taking. It’s quick to rustle up more should they be a hit so its a win win – stress free and super quick.

I have added two chillies below, but by all means add only one if you want a more subtle approach

2 chillies, finely chopped (1 if you prefer it less hot)

1. In a large bowl whisk the eggs and then add the chilli, fresh coriander, tomato, rock salt and fresh ginger (if using).

2. Slice the sourdough bread and then soak the bread in the egg mixture on both sides.

3. Heat the oil in a frying pan and when it is hot place the soaked sourdough into the pan. Leave to bronze on one side for a couple of minutes before turning for a further couple of minutes on the other side.

4. Serve immediately with some Sriracha chilli sauce or my chipotle sauce if you have some already made up. Both work a treat.

Sometimes the simplest dishes are the best. A plate of freshly steamed samphire with a knob of butter, a moule mariniere with crusty bread to mop up the sauce, a mature chunk of cheddar with a crisp apple, a boiled egg dipped into cumin powder, fresh tomatoes with fresh basil and buffalo mozzarella drizzled in the finest extra-virgin olive oil, fresh asparagus dipped in butter (have you noticed there’s a butter theme going on here!). I could go on but in this day and age when many chef’s are pushing boundaries and creating new flavour sensations and wowing us with their scientific approach to the culinary arts it sometimes comes as a welcome relief to sit down and eat a meal that is not complicated and flash but is simple and truly delicious.

For those who have been following my blog for a while will know, I don’t really have a sweet tooth, well certainly not the kind to have dark chocolate cake/torte/mousse at the end of the meal. Growing up my favourite puddings were rhubarb crumble, pavlova, custard tart and anything with nuts in. Mr B on the other hand loves all the old English puds and often puts a request into my mother at around Christmas time to prepare one or two – things like jam roly poly, spotted dick, treacle pudding, tiramisu – she’s good at making all these, so I let her run with it.

Generally speaking we tend to just pick on fresh fruit at the end of the meal, which is not only delicious but also satisfying and involves no effort or preparation.

I recently came across a pudding however that immediately catapulted itself into the top league of puddings after the first mouthful. It involves 7 ingredients and can be whipped together very quickly.

Saffron and Cinnamon Honey with Figs and Greek Yoghurt

1. In a saucepan place the cold water, sugar, honey, cinnamon stick and saffron and stir thoroughly until the sugar has completely dissolved. Simmer gently for around 15-20 minutes. Do not over cook as the liquid will turn into a thick toffee substance, which you do not want to happen.

2. On a serving plate/bowl add a generous dollop of Greek yoghurt and place three fig halves on top of each mound of yoghurt.

3. Finally gently spoon the scented honey over the figs and yoghurt having removed the cinnamon stick first and serve.

Note: You can also gently heat the figs in the honey for a minute on both sides, however I tend to prefer them fresh with the honey drizzled on top. Try both and see which you prefer.

As you are likely to have some sweet scented honey left over the following Scandinavian influenced open sandwich works a treat with the sweetness of the honey and the saltiness of the cheese and prosciutto/parma ham.

Per Serving you will need:

drizzle of scented honey (re above recipe)

I tend to make this open sandwich in the following order: bread, prosciutto, cheese, rocket, peach (or can be before rocket), honey and black pepper.

It makes a very satisfying lunch as the flavours compliment each other so well. For this photo shoot above I used white flat peaches but I think the sweet yellow flesh peaches would probably look more attractive on an open sandwich. 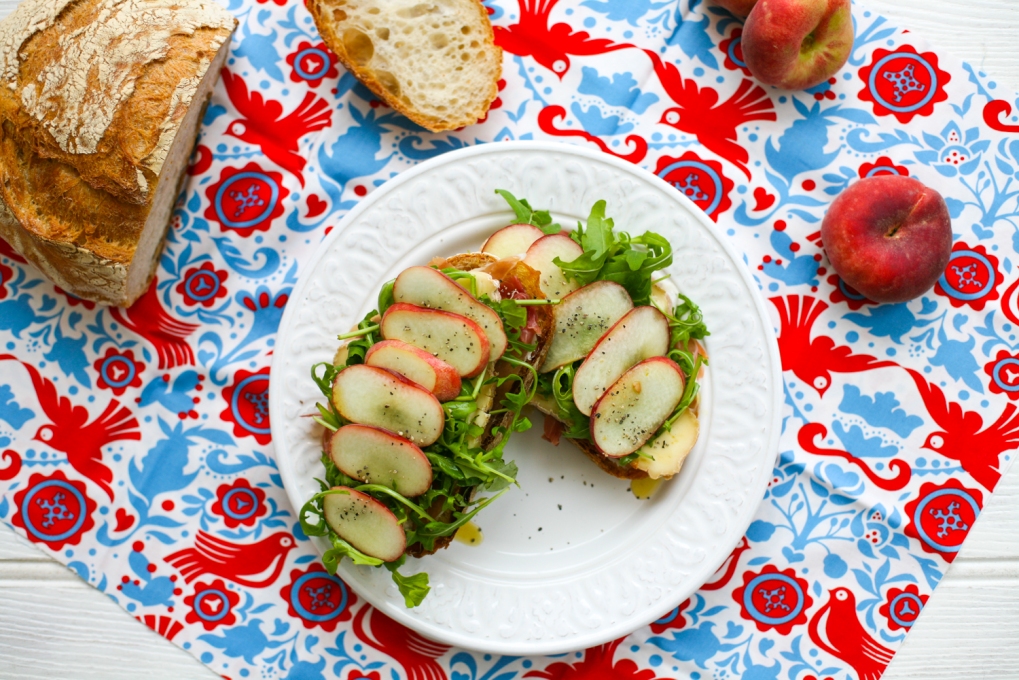