You’ll have to excuse me for this blog post. It slightly pains me to post it if I am being honest as the photographs are all wrong…in the sense that I took them in the evening with no light. This is a major no no for food photographs and normally I always shoot in daylight but for this post I could not reheat the dish and as much as I love scallops I really did not want to eat them for lunch and supper. So please overlook these dark shots and believe me when I tell you this is a seriously quick, tasty and stylish dish that is guaranteed to please anyone you present it to.

Fresh scallops are wonderful, but I sometimes buy frozen from my local fishmonger and they work pretty well and are relatively good value. I am also a HUGE fan of black garlic. I wrote an article about black garlic for Country and Townhouse Magazine which you can read here. It will tell you all about them so have a peek at the article. Black garlic is beginning to pop up in some supermarkets but I sometimes just order it directly from either The Garlic Farm,  Merchant Gourmet or The South West Garlic Farm. 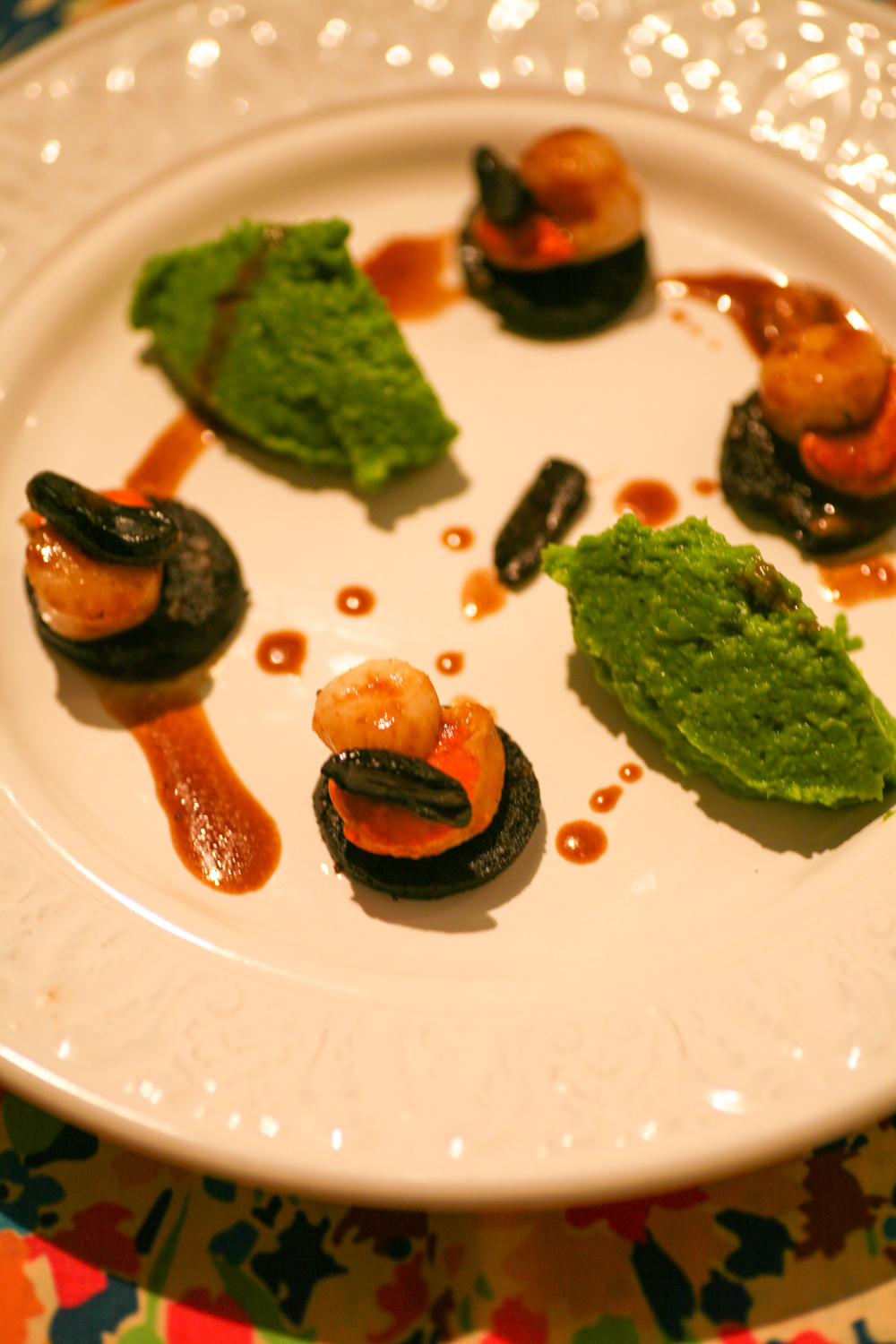 Some people are squeamish about black pudding, but please people seriously there is nothing to get worked up about, unless you are vegetarian/vegan then I apologise. The fact is the saltiness from the black pudding works brilliantly with the scallops and the black garlic adds a umami (I wrote an article about this too – read here) sweetness that bursts in a flavour explosion in your mouth. I have added a balsamic jus to bind it all together and then added little quenelles (oval shape mounds of food) of pea and mint puree.

The colours and flavours are magical. I think it probably works best as a starter or you could just add a few more scallops and black pudding to turn it into a main.

salt and pepper to season as required

1. First place the oil in a frying pan and when it is hot add the black pudding slices and cook on both sides for a couple of minutes, by which time they will have darkened in colour and crisped up slightly. Set aside in a warm place.

2. In a separate pan boil the peas and add the mint to infuse. After 5 minutes, drain and then puree using a blender. You can add a little chicken stock at this stage if you want a smoother more runny puree. Set aside in a warm place.

3. Raise the temperature slightly and add the boiling water if you want more of a jus and boil for a few minutes so the jus reduces and thickens slightly.

4. To plate up (use pre-warmed plates) add the black pudding followed by the scallop and then the black garlic. Next create quenelles with the pea and mint puree. They are easy to do. Watch the quick video below to show you how to do them.

5. Finally pour the jus over the scallops and around the plate.

Serve immediately so that it is still hot.

For those who like a bit of tradition and flag flying this coming weekend is going to be super HUGE in the UK as it’s the Queen’s Diamond Jubilee, which marks her 60th anniversary on the throne, impressive by anyone’s standards.

The celebrations will stretch far and wide and, for the most part, everyone seems to be really embracing the whole event. I, for one, am looking forward to watching the ‘Thames Diamond Jubilee Pageant’, which is going to be one of the largest flotilla of boats to ever sail down the Thames. I was fortunate to be in Amsterdam a number of years ago, during their famous ‘SAIL Amsterdam’, which only occurs every 5 years and consists of thousands of boats, including the  impressive tall ships, gathering together on the waterways that make up Amsterdam. If the Thames Pageant is going to be anything like Sail then we are going to be in for a real spectacular treat.

High streets and retailers have gone into cool Britannia overdrive with a plethora of merchandise celebrating the Diamond Jubilee. British designers such as Vivienne Westwood  have even created a whole collection – the ‘Capsule Collection’ – to honour, in her own rock hard/edgy way that we so love, the Diamond Jubilee. There are scents, patterened tights and even make-up lines who are all adding their own twist and mark on the occasion. The National Portrait gallery in London has even dedicated a whole exhibition to Her Majesty the Queen.

Union Jack bunting is literally up everywhere and similarly to when Will and Kate tied the knot, street parties will be happening up and down the land. It’s neighbourly, jolly and brings everyone together over a glass of Pimms and a scone with jam and clotted cream or whatever English fancy floats your boat.

There are certain foods which scream ‘I’m British’ such as the trifle, scones (as above), sticky toffee pudding – well perhaps not in this heat,  cocktail sausages, egg, salmon or cucumber sandwiches, Eton mess….but for me I thought the scotch egg was synonymous with Britishness. I have made up my own recipe for making them and instead of using hens’ eggs, I thought that using quail eggs would be a dainty alternative and more attractive finger food. I have made two varieties, which give them an individual twist – either black pudding scotch eggs or fresh red chilli scotch eggs.  I initally prepared 12 however in a very short space of time they were consumed, so another batch of 12 was made the following day.

What little dainties will you be cooking for your Diamond Jubilee party?

1. Separate the sausagemeat out evenly into two separate bowls. I used sausages and then split them open and discarded the outer skin, but you can also simply buy a packet of sausagemeat.

2. Place the black pudding into one of the bowls of separated sausagemeat and the finely chopped red chilli into the other. Use your hands to mix together the ingredients.

3. Place the panko breadcrumbs (I also used these Japanese breadcrumbs here) in a separate bowl and whisk the hen eggs into another bowl.

4. Gently place the quail eggs in boiling water for just under 3 minutes, then drain under cold water and peel the shells and set aside.

5. Using damp hands create a layer of  the sausagemeat/black pudding around 6 of the quail eggs so that they look like little meatballs. Damp hands will allow you to work more easily with the sausagemeat. With the remaining 6 eggs cover with the sausagemeat and red chilli. Then dip each scotch egg into the whisked hen eggs to coat completely and then into the breadcumbs.

6. Fill a third of a small deep pan with sunflower oil and gently heat up. When it is hot – drop a couple of panko breadcrumbs into the oil and if it sizzles the oil is ready.

7. One at a time, place the scotch eggs gently into the hot oil. I suggest cooking in batches of three at at time as you want to make sure that they are evenly cooked. Using a slotted spoon turn the scotch eggs over so that they are evenly cooked through and are golden brown. After 3 minutes transfer them to a preheated oven (160 degrees if using a fan oven), for a further 2-3 minutes.

8. Serve warm or  at room temperature.