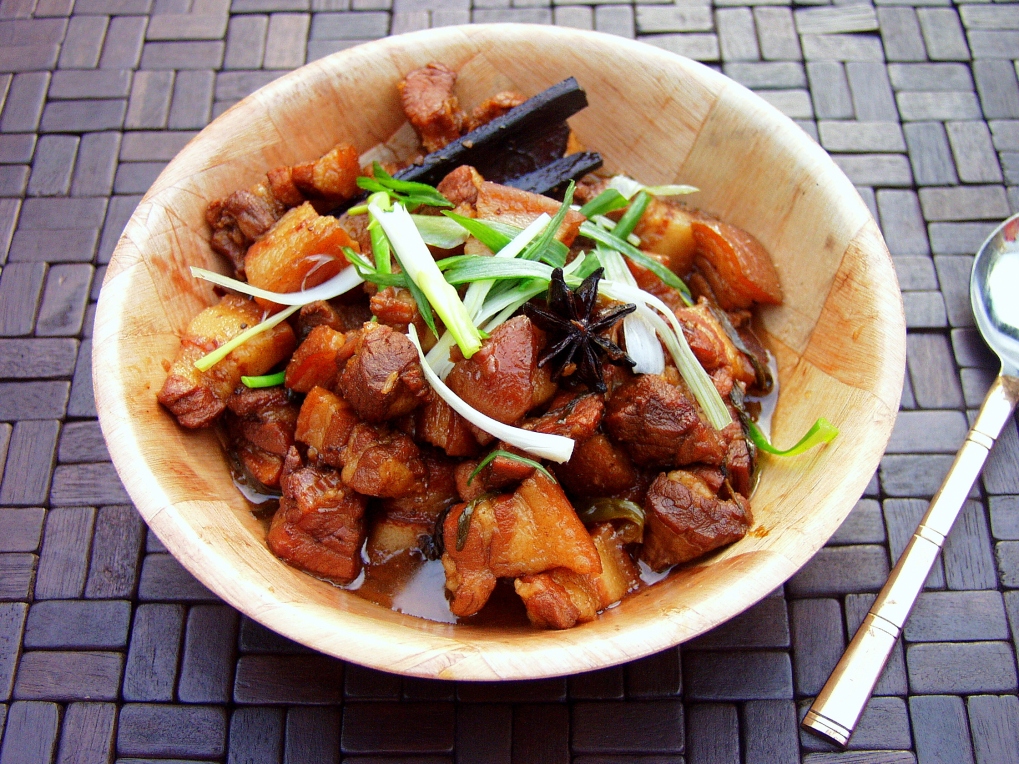 Not so long ago I purchased Leemei Tan’s cookbook ‘Lemongrass and Ginger’, mainly because her Asian recipes were calling out to me to be tried and devoured. It’s her very first cookbook and her recipes and stunning photographs – which she took herself  I might add, are hugely appealing.

She has split her recipes into regional geographies with chapters including: ‘Cambodia & Vietnam’, ‘India and Sri Lanka’, ‘Thailand’, ‘Malaysia & Singapore’, ‘Philippines & Indonesia’, ‘China’ and ‘Japan & Korea’. Not all recipes are accompanied by a photograph but the large majority are.

I decided to start by trying her ‘Sweet and Spicy Pork Belly’. It seemed straightforward and I had some pork belly in the freezer which needed using. I did end up using a little more pork belly than Leemei but that was mainly due to the five large bones that I decided to use instead of discard. Without the bones and the added meat on them, we would have had around the same amount of meat. Whilst the dish tasted delicious with pork belly I am going to prepare it again soon with a slightly leaner cut, which is less fatty.

As I was feeding three adults, and the recipe is for 4-6 people, coupled by the fact I had included a little more meat than Leemei, I managed to have a sufficient amount leftovers for the following day, which I prepared in a slightly different way so as to create a new version of the dish.

Both dishes I prepared with boiled long grain rice.

1.3kg pork belly, cut into bite-sized pieces (I added the 5 large bones), but if you are not doing this only add 800g of pork belly)

2 spring onions, cut into 6cm/2 and a half inch lengths

1. Cut the pork into bite sized portions and add to a saucepan of boiling water for 3 minutes so as to seal the meat. Drain and place to one side.

2. Heat the oil gently in a saucepan and add the star anise, cinnamon and dried red chillies and stir fry for 2-3 minutes until fragrant.

3. Add the garlic and stir fry for another minute before adding the Sichuan peppercorns and stir frying them for a further minute.

4. Add the pork belly and mix well before adding the honey and the light and dark soy sauces, rice wine, spring onions and ginger. Let the ingredients cook together for 5 minutes, before adding 150ml of water. Bring to the boil and cook for  a few seconds.

5. Reduce the heat and cover for 45 minutes when you find the liquid has reduced and thickened and the meat is tender.

The following day I added a few more ingredients to the leftovers to create this:

1. Heat the oil gently in a pan and add the garlic and chilli. Stir and cook for 20 seconds before adding the ginger and yellow courgettes.

2. Continue to stir occasionally for 3-4 minutes and then add both soy sauces.