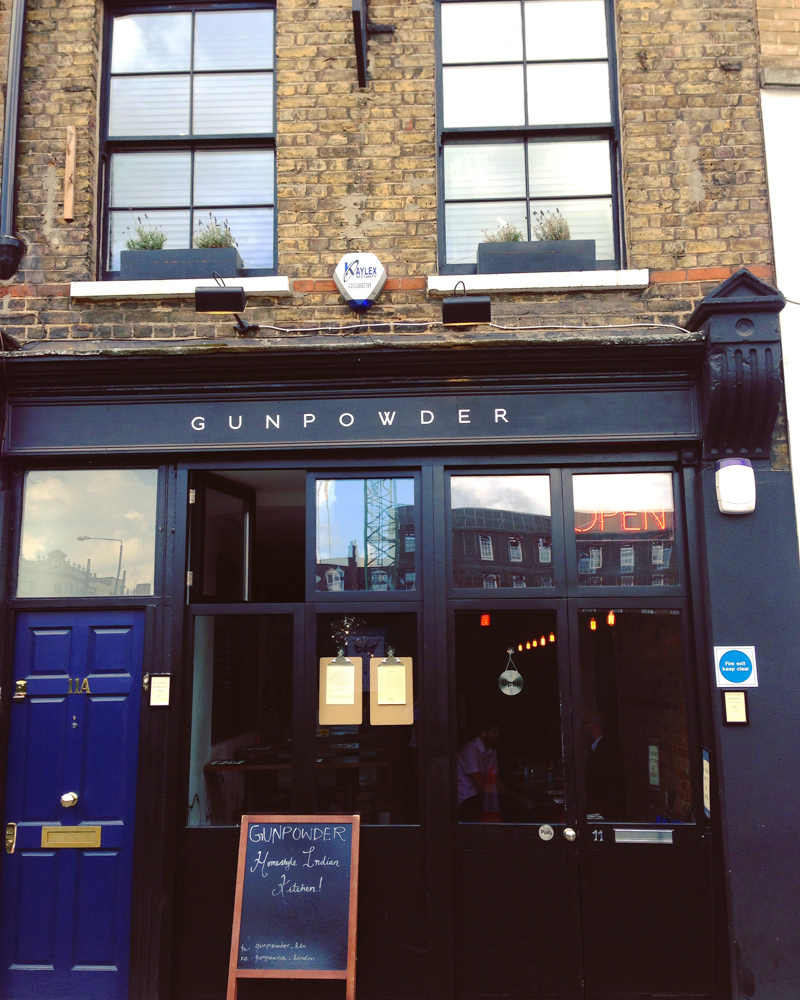 I rarely eat out at Indian restaurants these days – other than my old favs down in Tooting. My other half is Indian, so as you can imagine by default I cook and eat a fair amount of Indian food. When my mother-in-law comes to visit or we go and stay with her, she spoils us with her traditional Bengali fare, so in many respects I’m pretty spoilt when it comes to tasty, home cooked Indian food.

My other half had recently eaten at this new Indian restaurant, close to Spitalfields market and the Bangladeshi enclave of Brick Lane, named ‘Gunpowder’ and had waxed lyrical about how much I would love it.

I did not need to be asked twice. It was relatively easy to find – literally 5 minutes walk from Liverpool Street station. The exterior, although small and low key, appealed; the font and paint work had been chosen with care. As there is a no reservations policy I arrived just past noon to find only one other table already seated. It was not long however, before the place filled up with hungry diners. Whilst I waited for my fellow guests the waiting staff were attentive and friendly, guiding me around the menu and the days special – partridge cooked in Indian spices, if I recall. 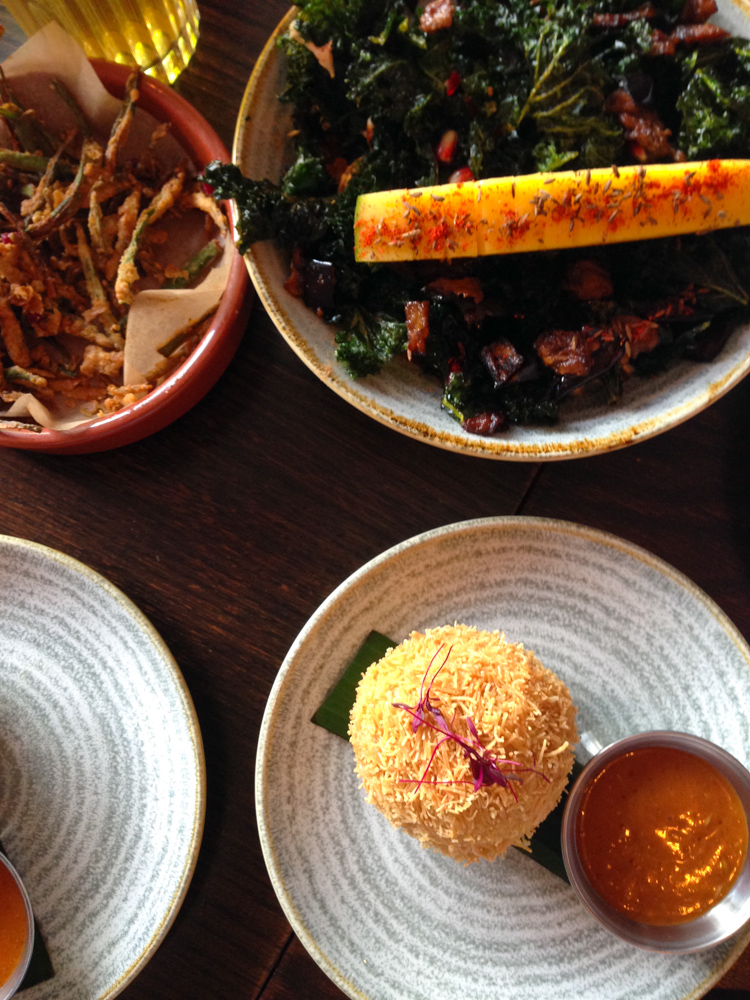 Much like the restaurant itself, the menu was small and yet perfectly formed – it seats only 28. Although Gunpowder – named after a spice mix and a nod to the old artillery ground nearby – is on the premises of an old curry house, it is far removed from your typical cuzza. The restaurant is the brainchild of Kolkatan Harneet Baweja and his wife, who brought on board Mumbai-born head chef Nirmal Save, ex Tamarind and Zaika.

The menu choice is refreshingly original with dishes such as: chettinad pulled duck served with homemade oothappam, sigree grilled mustard broccoli, karwari soft shell crab and wild rabbit pulao, to tempt diners. The cuisine is not specific to an area, instead encapsulating elements across many regions.

We started with ‘rasam ke bomb’ – which were the perfect spice explosions to kick off the proceedings. The ‘rasam’ – a spiced Indian thin soup, was presented in shot glasses. On top sat round crispy shelled pani puri. Within these little beauties was a lighted spiced potato mash. We were encouraged to bite, sip and bite again until we had finished both the ‘bomb’ and the shot. It was the most magnificent way to start the proceedings adding a theatrical allure to the whole occasion.

Whilst we waited for our other dishes to arrive we munched on tasty porzhi okra fries. Even if you’ve been put off okra in the past seriously try these, you will not be disappointed. Following the fries we feasted on spicy venison and vermicelli doughnuts, which looked similar to scotch eggs but instead had soft spiced venison incased within a crispy shell. The hot dipping sauce to accompany the doughnut added further zing and spiciness to the dish. We followed these with maa’s Kashmiri lamb chops, saag with tandoori paneer and a rather delicious spiced kale with a yogurt dressing. I loved the attention to detail and the genuine passion that had gone into making each dish.

The restaurant is onto a winning formula in that the menu is original and yet follows through spectacularly with flavour and heat. Those who love their spices will feel right at home at Gunpowder. This is not the place to come if you are looking for your chicken korma and other typical curry house dishes. I am already looking forward to my next visit.