This Vietnamese pork and noodle dish is wonderfully fragrant and tasty and very straightforward to put together. It is known as Cau Lau in Vietnam and is a speciality of the world heritage town of Hoi An. Cau Lau is a noodle that is made from rice and water – nothing new there I hear you say – but wait – the water is supposedly from a well in Hoi An. Into the collected well water the locals place the ash of the La Gai Leaf, which they burn. The water and ash are then left over night to rest and then it is this water that is then used to make the noodles, which gives them a light brown hue. As they are tricky to come by in London, I have replaced them with the rice ribbon noodles, but frankly you can use whichever noodle you have to hand.

So this is what you need: 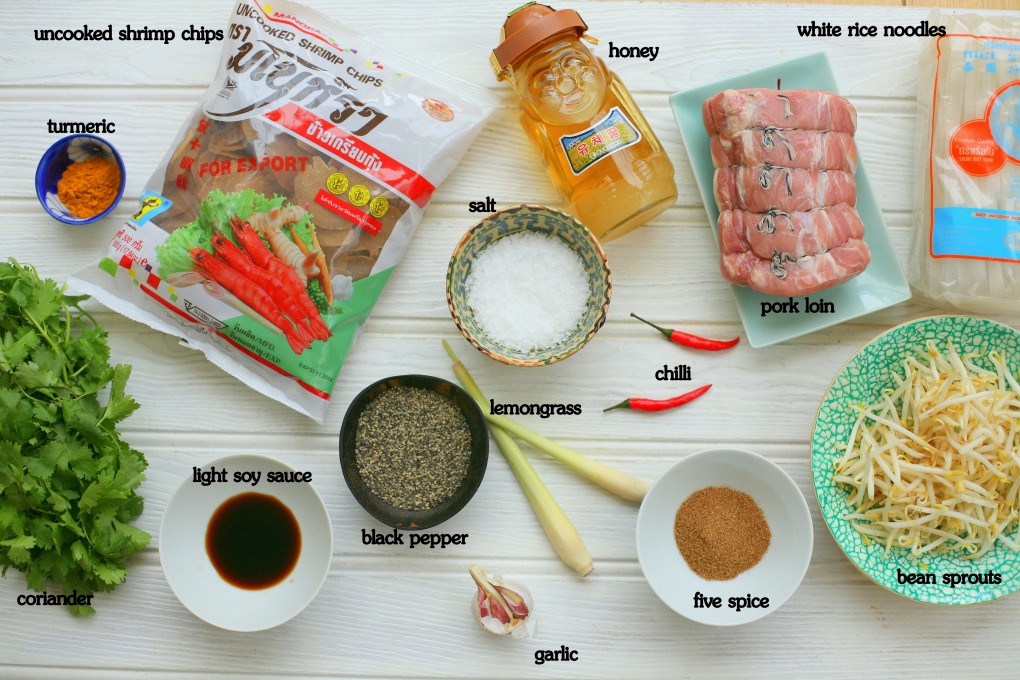 The only ingredient absent from this photo is ‘sweet basil’, which I managed to source before devouring the meal. It is not a absolutely necessary but definitely adds a delicate fragrant flavour if you are able to get hold of some. 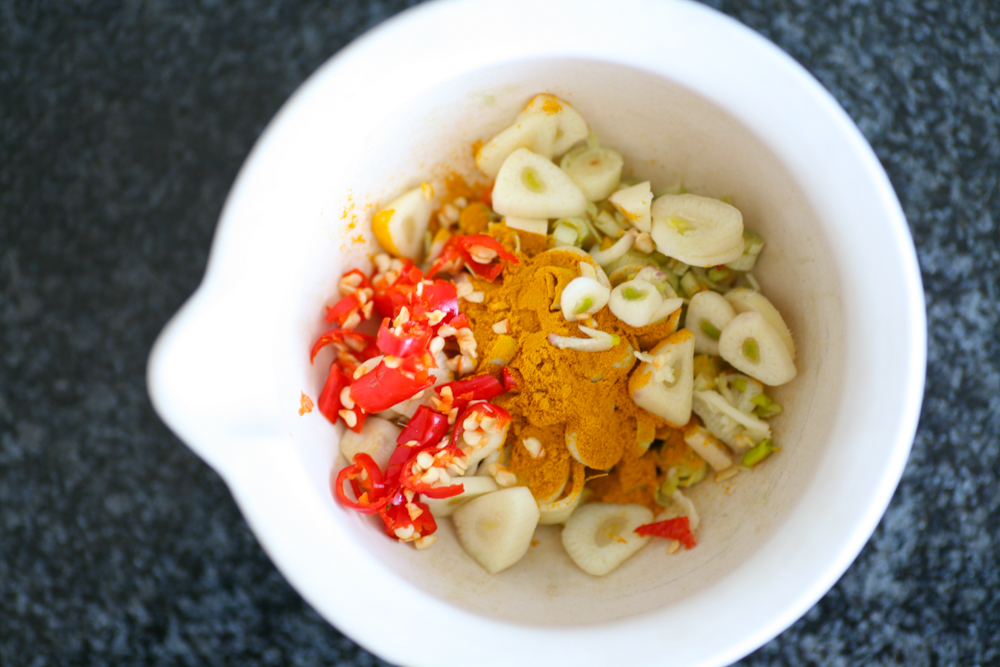 Place the chilli, turmeric, garlic and lemongrass into a mortar, as above and give it a good grind with your pestle. If you don’t have one simply use a bowl and the end of a rolling pin, works wonders! 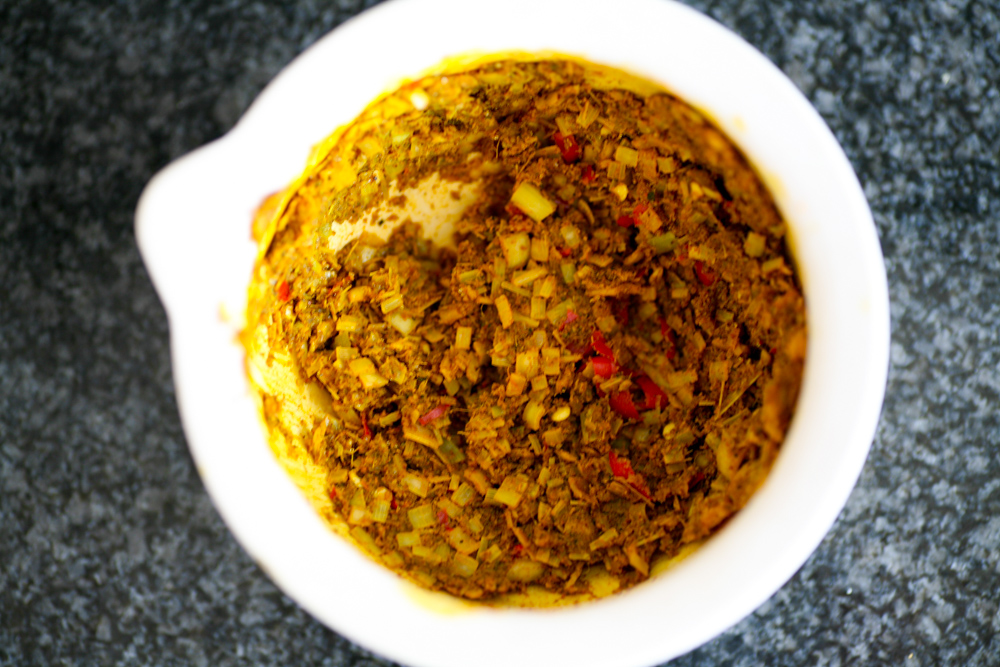 Then add the honey, soy sauce, five spice powder, salt and pepper to taste and you will end up with a marinade to pour over your pork loin.

Keep the fat on the pork loin and cut into 6 pieces. Using your hands cover and mix the marinade over all the pieces and then leave the meat to marinade in your fridge for ideally a few hours or even overnight if you can.

In a large, slightly deep, pan pour in some oil and bronze each piece of pork on both sides. 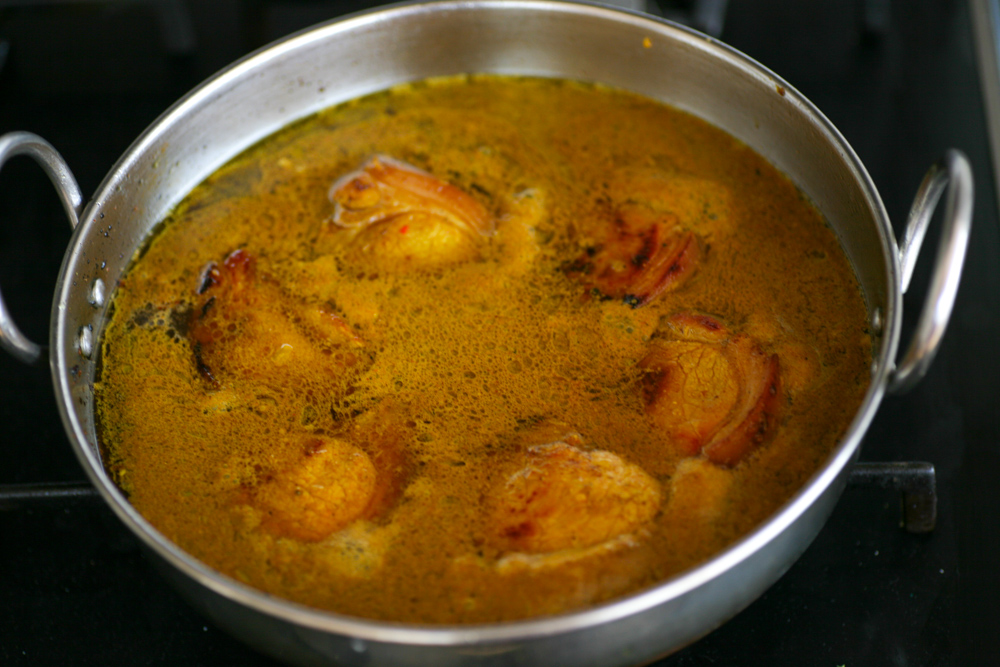 Then add the marinade along with enough water to just cover the pork. Simmer and cover for around 45 minutes, by which time the pork will be tender and the sauce will have reduced by around half.

Before serving remove the fat from the pork and discard and finely slice the pork. Follow the instructions for the noodles. For ribbon rice noodles I simmered them for around 5-7 minutes in boiling water and then strained them and ran them under cold water for a second. Whilst the rice noodles are cooking place a little oil in a pan and when it is hot add a handful of uncooked shrimp chips for 10 seconds, by which time they will puff up and curl.

When serving place a good helping of noodles into a bowl followed by the sliced pork loin on top. Ladle a generous spoonful or two of the remaining marinade/sauce on top followed by a small handful of bean sprouts, coriander and sweet basil on the side. Lastly add the shrimp chips and a slice of lime. Serve hot and enjoy.

Adapted from The Green Bamboo Cooking School recipe in Hoi An

small handful of fresh coriander and sweet basil per serving

2 chillies, finely chopped (remove seeds if you prefer less of a kick!)

salt and pepper to taste

1. Using a pestle and mortar, or bowl and end of a rolling pin, crush the lemongrass, chilli, garlic and turmeric for a few minutes. Once the ingredients have broken down add the five spice powder, soy sauce and honey.

2. Place the pieces of pork loin (with fat on) in a bowl and cover with the marinade using your hands. Place cling film over the bowl and place in the fridge for at least an hour – you could leave over night if you have time.

3. Using a fairly deep pan, heat up a little oil and bronze both sides of the pork loin. Then pour in the marinade and add enough water to the pan so that the pork loins are just covered. Simmer for 45 minutes at which point the sauce will have reduced by almost a half and the pork loin will be tender.

4. When the pork is cooking, in a separate pan add some oil and when it is hot place a small handful of uncooked shrimp chips into the oil and cook for 10-15 seconds, by which time the chips will have puffed up and lightened in colour. They burn really quickly so don’t take your eyes off them during this part. Place to one side on some kitchen roll. Repeat until you have enough to put a few on each serving.

5. Heat up some boiling water and add the rice noodles for the time specified on the packet – which is usually around 5-7 minutes. Strain and run under a cold tap briefly and separate into each bowl.

6. Using a spatula take the pork loin out of the sauce, remove the fat and slice thinly. Place the pork slices onto the noodles and add a ladle of the sauce on top of the pork and noodles. Add a small handful of bean sprouts, coriander, sweet basil and shrimp chips to the bowl along with a wedge of fresh lime.